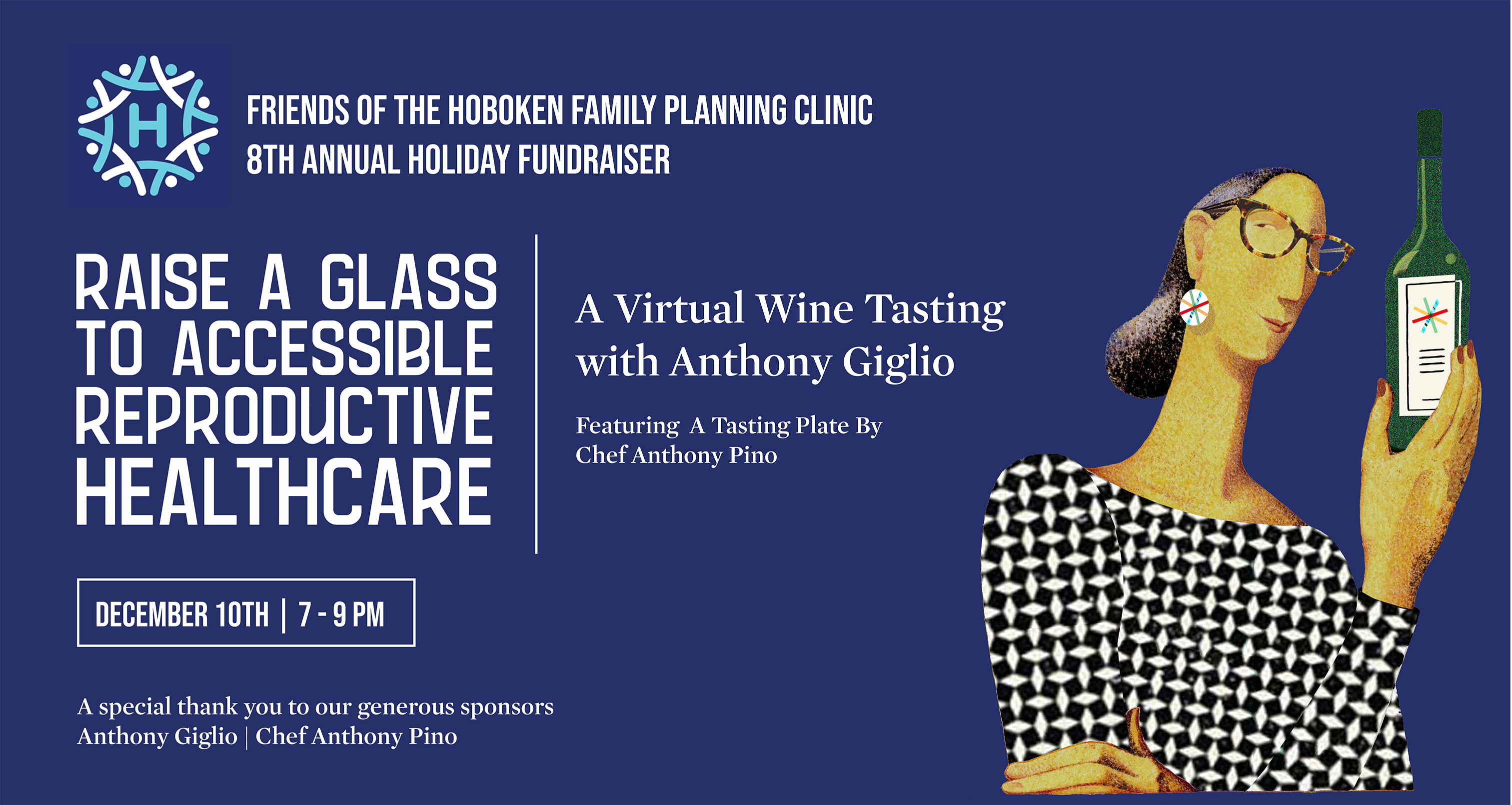 Thursday, December 5 from 7 to 9pm

Hosted by Silvia Garcia Codony and Allan Kristensen at their stunning penthouse apartment in the W Hotel.

Hoboken Family Planning has served their patients and our community for over 40 years.  Together we can support reproductive and cancer care to low income women and men in their three Hudson County locations.

This year, funds raised will pay for Human Papilloma Virus (HPV) vaccines for medically underserved women and men 18 and over.

For further information and to purchase tickets please click below:

Sexual Transmitted Infections Are On The Rise

ON THE RISE, PARTICULARLY AMONG YOUNG PEOPLE

Nearly 2/3rds of Chlamydia Diagnoses and 1/2 of the Gonorrhea Diagnoses.

Therefore, there is a Need to Educate Young People

Living In Hudson County and Elsewhere About the Dangers of STIs.

Despite the recent declines, 2015 was the 2nd year in a row in which increases were seen in all 3 nationally reported STIs (Chlamydia, Gonorrhea and HIV).  Substantial increases were also seen among reported cases of gonorrhea and syphilis, particularly among males.  Chlamydia if left untreated can lead to serious health problems and Gonorrhea which is the second most commonly reported notifiable disease in the US, second to Chlamydia, is curable but according to the CDC increasing numbers of drug-resistant strains means that it is becoming harder to treat some cases of gonorrhea.  Syphilis is simple to cure with the right treatment, but it can have very serious complications when left untreated.   However treatment will not undo any damage that the infection has already done.

Hudson County has a large number of immigrants, many of whom do not get educated about STI’s, therefore many do not seek preventive screening information, they do not get preventive health screenings and often do not see a Doctor until their condition escalates and they have major health problems.  They also do not understand the health care system and often fear it.  In addition, culture can play an important  part and sometimes they lack family and community support.

Women’s rate of syphilis has increased over the past year by more than 27 percent, and the rate of reported congenital syphilis transmitted from a pregnant woman to her baby has increased by 6 percent.  While both young men and young women are heavily affected by STIs, young women face the most serious long term health consequences.  It is estimated that undiagnosed STIs cause infertility in more than 20,000 women per year.   Turning the STI epidemic around requires major prevention efforts through outreach, education, and screening, which we at Hoboken Family Planning are doing and it is one of our main objectives.  Unfortunately Herpes is everywhere, and currently about 50% of the population of the entire country has oral herpes.

The cost of being screened and embarrassment is often a barrier to young people and therefore they don’t get screened until they have a major problem.  Due to recent budget cuts many clinics have either closed or no longer do screening.  Fewer clinics mean reduced access to STI education, testing and treatment for those who need these services.  STIs also impose a substantial financial burden on communities, according to CDC’s estimates, STI cases cost the US Healthcare System approximately $16 billion every year.

According to the American Sexual Health Association, more than half of all people will have an STI at some point in their life.  STIs are a substantial health challenge facing the United States, CDC estimates that nearly 20 million new sexually transmitted infections occur every year in this country.  Each of these infections is a potential threat to an individual’s immediate and long term health and well-being.   Quality Healthcare is the most important factor for the health and well-being of a community, and widespread access to screening and treatment would make for a healthier community.

According to Dr. Jonathan Mermin, Director of CDC’s National Center for HIV/AIDS, Viral Hepatitis, STI, and TB Prevention, “STI rates are rising and many of the Country’s systems for preventing STIs have eroded.  We must mobilize, rebuild and expand services or the human and economic burden will continue to grow”.  Hudson County has an 11.5% higher rate of newly diagnosed cases of chlamydia (356.4 per 100,000) than does New Jersey (319.6 per 100,000).  One of Hoboken Family Planning’s goals is to help reduce the incidence and spread of chlamydia in women 29 years and younger attending our family planning clinics (3) in the Hudson County area of New Jersey. In the past we have done education seminars and at present we screen for STI’s in spite of a limited budget.  In the past year, we performed almost 4,000 screenings.  Because of the need in Hudson County we want to educate, screen and treat or refer patients for further treatment when needed.  As always the best ways to reduce your risk of getting an STI is to practice safer sex and to get tested regularly

Let’s make sure that the burning or itching sensation that you are experiencing is the kind that is cured with aloe vera not penicillin.  So don’t be the one that says “except for the burning and itching sensation and the discharge, I FEEL FINE”.  But should you have an itch or burn, call us at 201-963-0300 or come see us at any one of our 3 clinics strategically located in Hoboken, Union City and West New York.

Thursday, December 6 from 7 to 9pm

Hosted by Jim and Alice Kocis, in their beautiful townhome at 504 Hudson Street in Hoboken.

For further information and to purchase tickets please click below:


This website includes materials that are protected by copyright, or other proprietary rights. Transmission or reproduction of protected items beyond that allowed by fair use, as defined in the copyright laws, requires the written permission of the copyright owners.